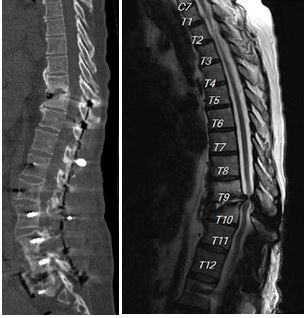 This patient was referred to Dr. Anand by another physician in July 2016. She had a history of a T10 to pelvis posterior instrumentation and fusion in October 2014. She was doing well after that surgery up until April 2016. She began developing pain in her right leg, trouble standing up straight, and weakness and numbness in her legs. Upon her arrival to Cedars-Sinai in July 2016, she essentially had lost all the strength and movement in her legs, except for the ability to slightly wiggle her toes. As demonstrated on her MRI and CT scans, she had developed a fracture of the T10 vertebral body with erosion of the T10 screws into the T9-10 disc space. The collapse of the T10 vertebra and T9-10 disc space into kyphosis resulted in severe compression of her spinal cord.

She underwent a T9 laminectomy with a T2 to T12 posterior instrumentation and fusion. Over the course of her 12 day hospital stay, she regained significant strength and sensation in her legs. With continued therapy, she has been able to regain movement and strength in her legs and has returned to an independent and active life.