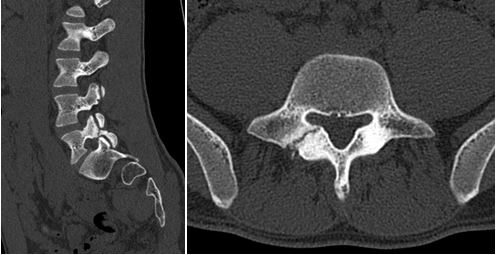 This Pepperdine University student athlete presented to Dr. Anand after five years of back pain. He first noticed pain in his back while playing baseball in 2011. His initial treatment was rest and suspension of play for a month and a half. He was then able to manage with his back pain and continue playing baseball up until 2015, when the pain became intense once again. Despite rest and physical therapy, he was unable to continue playing competitively by early 2016. MRI and CT scans of his back demonstrated a fracture of the pars at L5 on the right.

Given his ambition to play baseball professionally, Jordan was at a point where he was ready for definitive treatment. Therefore, Dr. Anand recommended a minimally invasive internal fixation of the L5 pars defect. His father shared the following comments in 2018 after Jordan was drafted by the Tampa Bay Rays:

“I wanted to share the news that Jordan Qsar had a wonderful season at Pepperdine University Baseball and was Player of the Year in our conference. He was also drafted by the Tampa Bay Rays recently and will be pursuing his Major League Baseball dream. If it wasn't for Dr. Anand's expertise and surgery, Jordan would not be where he is today. As you know, Jordan came to Pepperdine on a baseball scholarship in 2014 and had several years of back pain that limited his ability to play a full season. After seeing many doctors it wasn't until we saw Dr. Anand that he diagnosed his back pain correctly and recommended a direct pars repair of the L5. The surgery was on May 3, 2016 and was the best thing we could have ever done. Please share this news with Dr. Anand and staff which I'm sure they would love to hear. Jordan's baseball career was saved by Dr. Anand when others were telling us to give it up. His back is healthy and pain free. Thank you again.”